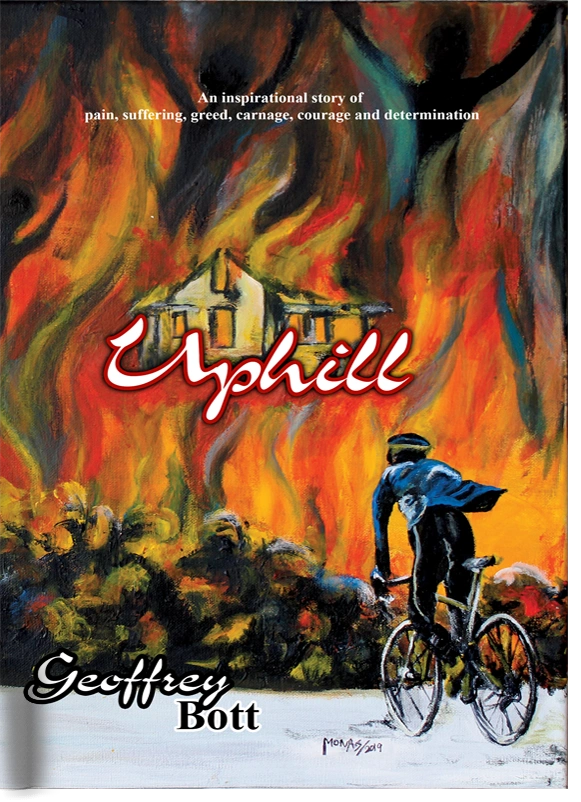 An astonishing story, from the man who lived it!

Uphill is incredibly emotional, vivid and detailed about the rise and fall of a gifted and talented engineer. An innocuous knee injury playing rugby for his city would develop into a grim prognosis a few decades later. A month after rejecting a second groundbreaking knee rebuild procedure, his wife files for divorce and the life he had attained started to unravel.

The book takes the reader to a bar in soviet Russia, a brothel in Venezuela, a nightclub in Hong Kong, to Taipei, Tokyo, Vancouver Island, a casino in Las Vegas. It graphically describes thirteen left knee surgeries, screaming pain, addictions to mind-altering opioids, a precedent-setting divorce, a court file sealed from public records, a forest fire that destroyed his new neighbourhood, a night in jail, world’s first scientific discoveries and cycling heroics deemed impossible that left the renowned medical profession speechless. This is a captivating page-turner that has it all and encapsulates the very essence of human suffering, courage, hope and determination. An inspirational, entertaining and riveting story that will leave the reader stunned and emotionally drained.

Geoffrey Bott, an England native, graduated with an electronic engineering degree before age 21. He entered the field of mass spectrometry and started his own

scientific company in California at age 24. Geoffrey’s expertise and knowledge gets him invited to laboratories all around the world.

He is divorced with two children and resides in South Lake Tahoe, California.

Born in England to a middle class family, Geoffrey Bott excelled at school in most sports. A tenacious and unbridled drive to succeed that he didn’t know would be required in order to survive later in life.

Armed with a degree in engineering from the University of Sheffield, Geoffrey moved to California to reap his American Dream.

I didn't have the pain level you did and for so long. I know all about the tears too. I want to ask questions when I am finished and learn about the stories which had to be removed.

My Uncle Michael is a retired school teacher...

I couldn't put the book down, Geoff. I have read it three times. You said exactly what you needed to say. Incredibly well written

Sergey was my second interpreter in Russia back in February 2018. We became friends very quickly...

God shield you, my dear friend! I am reading it with Nataly. You had remarkable patience going through the knee surgeries.

James was a client for many years at UCSB...

I read it in one sitting. I couldn't put it down. You lay it all out there.

My lawyer and friend for many years...

When you told me you had written a book, I thought it was a pipe dream. Then I read it. Wow, very well written. It made me cry in places. Your writing style would be really good for a thriller as a second book.

My friend and renowned professional editor...

We did it. I am so proud of you. I am privileged to be part of Uphill

Chris was my physical therapist for three years and we became close friends...

I couldn't put it down for about three days. Really impressed Geoff. What you went through would be really impossible for most, but you managed to do it at the same time being there for two teenagers, and traveling the world to keep your business going (with disabling knee pain). As with most cyclists, you just kept pedaling through it all. Returning to Hong Kong at the end was moving because people don't understand the fog of pain, depression and stress. How you wove your cycles, automobiles and female friends into the story is very unique which likely helped you keep your sanity.

I cannot imagine what you went through. It made me cry in places.

My lovely sister in England...

It is a cracking read. I am sure it will do well.

Uphill is brilliant. I cannot believe you can write this well. The delicate scenes are executed with such elegance and class.

Drop us a line!